Skip the explanation and go straight to the instructions

What is Anomaly Detection?

Usually it means using machine learning to identify outliers but you can do anomaly detection with any v1.0 human eyeball too.

Aside from all the complexities of machine learning an important difficulty is knowing what an anomaly is. Sometimes it is entirely expected to have some data that is very different to the rest.

Forecast Forge is focussed on timeseries data; data where each observation is associated with a specific time. An anomaly is then where an observation is very different from what we would expect given the trend and seasonality in the data. 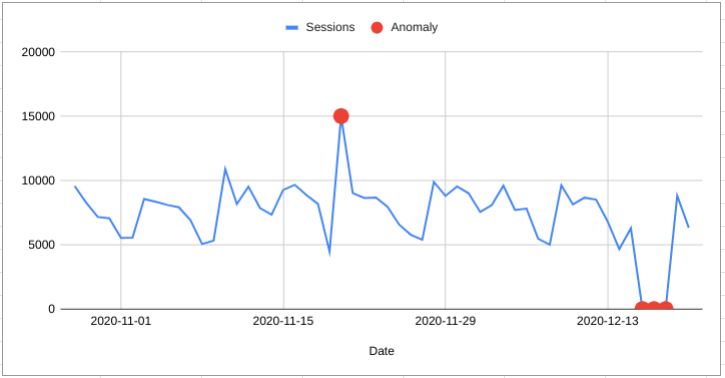 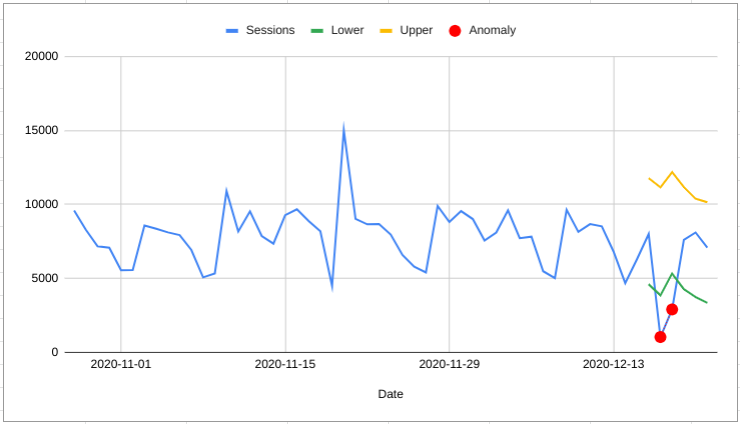 One way to do anomaly detection is to make a forecast and then look for any points that lie outside the forecast interval.

For example, I can make a forecast with a 95% interval for the next 7 days and I know that there is only a 5% chance of any individual day falling outside the forecast range.

In the example on the left there are two anomalous days that fall outside the predictive range.

There are two main disadvantages to this approach, one of which applies only to Forecast Forge and one of which is a more general weakness. 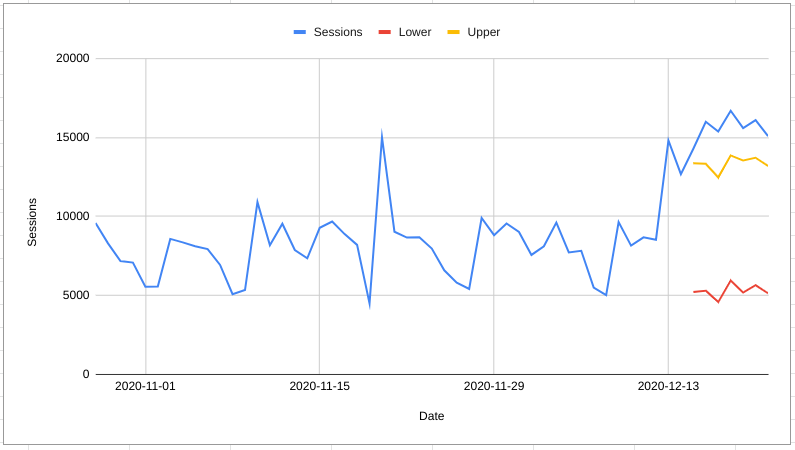 Forecast Forge uses a technique called Seasonal Hybrid Extreme Studentized Deviates (S-H-ESD) which was developed at Twitter for detecting anomalies within their systems.

Seasonal means that a seasonally recurring high or low won’t be flagged as an anomaly. This algorithm doesn’t learn seasonal effects as well as the forecasting algorithm does, but it is certainly better than a non-seasonal algorithm.

Hybrid refers to using the median rather than the mean for some calculations within the algorithm. This means it can work with timeseries with lots of anomalies. Outlying values have a large influence on the mean so if there are quite a lot of them then they might not be classed as anomalies. Or worse, everything else might appear to be anomalous!

ESD has been used for anomaly detection since 1983. You can read more about it. It works better than some other options because you don’t need to specify the number of anomalies in the data in advance.

For more information about this algorithm you can read the paper describing it or checkout the github repository of Twitter’s implementation of the algorithm. This is what Forecast Forge uses behind the scenes.

Anomaly detection in Forecast Forge is provided by the FORGE_ANOMALY_DETECT function. It takes up to four arguments:

The output is a column of TRUE/FALSE values, one for each day. A TRUE value indicates an anomaly and a FALSE value is where no anomaly has been detected.

Displaying the results in a chart

After running FORGE_ANOMALY_DETECT you will have a column of TRUE/FALSE values. How do you turn this into a nice chart where the anomalies are highlighted?