A place to hammer out ideas

All I Want for Christmas Review

On November 9th 2021 I made a forecast for the number of pageviews of the wikipedia page for Mariah Carey’s song “All I Want for Christmas is You”.

Now that Christmas is over I can compare my forecast with what actually happened:

I also made a more specific prediction:

I was right about the number of pageviews on Christmas Eve (28k actual value) but I was wrong about when the peak would be. The true peak was on Christmas day with 35k pageviews.

What is the best way of splitting a media budget across the year? Two weeks ago I wrote an introduction to forecasting paid media; in this post I will develop the ideas further to show you how to use a machine learning forecasting model to figure out how much you should spend on a channel across the year.

The big idea here is that if you have a forecast that uses daily spend as a regressor column (see the last post for more on this) then you can estimate what would happen in the future if you spent different amounts each day e.g. “what would happen if we spent 10% more on April 12th?”

This can be quite useful by itself but you can take things to another level by asking the computer to test lots of different spend levels on each day in order to find the optimal values. If you have a good forecast model then this process can find the perfect balance between the diminishing returns of increasing spend and the fact that at some times of year there is more demand and higher conversion rates. Very cool!

In this post I will walk you through how to do this. Unfortunately this isn’t possible in the Forecast Forge Google Sheets addon because the addon hides a lot of the model details; I’m working on a solution for this at the moment but it is complicated. Instead I will build the forecast in tensorflow like I did with my most recent attempt to improve my Mariah Carey predictions.

For the training data I will use clicks and spend data from the Google Analytics demo account. This has the advantage of being public data from a real life Google Ads account. But it has some major disadvantages too as we shall see. If you can give me some data that I can anonymise and make public for use in future demos then I will give you a reduced rate for running the kind of analysis you see in this post; email fergie@forecastforge.com if you are interested in this.

The rest of this post weaves code, some outputs generated by the code and my commentary on what is going on together. You can download the Jupyter Notebook if you want to run this example yourself or edit it for your own data. If you do use it with your own data then I highly recommend also editing the forecast model; otherwise I think you will get bad results.

Start by importing some libraries and loading the data

I exported far too much data from Google Analytics; in the early years the advertising spend is intermittent with long blocks of no spend at all. It has only been for the last 329 days when there has been consistent activity so we will take this data only for the model.

In the block below I’m also doing some other tidying up (removing the totals row, and converting everything to a number)

Let’s have a quick look at the data 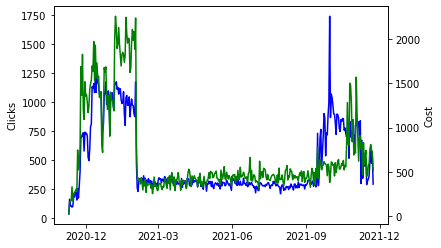 A couple of weeks ago I used Forecast Forge to build a forecast for the number of pageviews of the “All I Want for Christmas is You” wikipedia page in the run-up to Christmas. 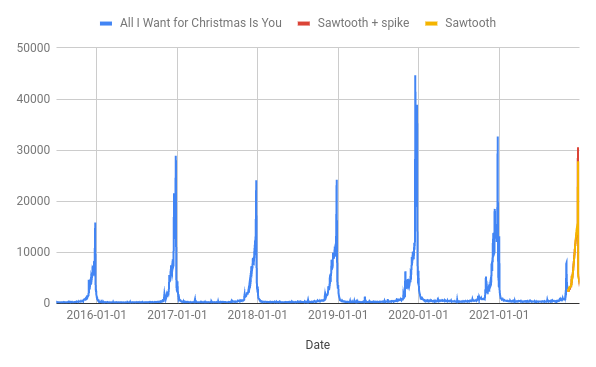 This forecast “looks” good - it has the peak roughly when we’d expect it and the magnitude is comparable with previous years. It passes the smell test, but I am still concerned about whether it predicts the size of the peak correctly. As you can see from the chart, the peak in 2019 was way higher than any of the preceeding years and getting this right is the most important part of my prediction. How can we tell in advance what kind of peak there is going to be?

PPC and Google Ads is where I first started in my career so it has a special place in my heart. I have a million ideas on how forecasting and Forecast Forge can help in this industry and they are all logjammed up in my head waiting for me to write “The Ultimate Guide to PPC Forecasting” or something like that.

You could say I’m having some supply chain issues with keeping the blog posts flowing so I thought I’d just get something out there with some of my thoughts even if it isn’t everything.

When thinking about which factors inflience paid channels one of the most important and most obvious ones is the amount of money you spend! Spend more money, get more clicks/conversions/revenue etc. How much more is an important question which I’ll get to later.

Without data on how much was spent any machine learning algorithm will struggle to tell the difference between changes in budget and other factors (e.g. seasonality, growth in the market etc.). Was June a big month because conversion rates are higher in June or is it just that the budget was a lot higher?

In Forecast Forge you need to specify the values for any regressor columns into the future in order to make a forecast. This is easier with paid media budgets than it is with something like the weather because people generally have a budget plan for the year ahead which can be a good starting point.

You can think of a very simple model of paid media performance as being something like this:

One of the good things about machine learning is that we can give is a vague model like this and it can fill in a lot of the details for us. The big idea here is that you can train the Forecast Forge algorithm on historical output and media spend data so that it will learn all the important patterns in the other stuff.

All I Want for Christmas is You 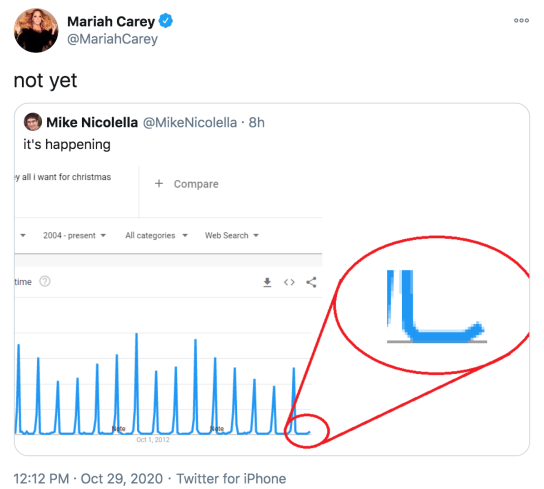 Every year someone notices Google Trends rising for “All I Want for Christmas is You”. It signals the start of the Christmas period for some. How high will it get this year?

Rather than forecast the Google Trend (complicated because the whole scale will be redone if Christmas 2021 is bigger than previous years) let’s look at the amount of traffic to the All I Want for Christmas is You wikipedia page. This data is freely available from Toolforge 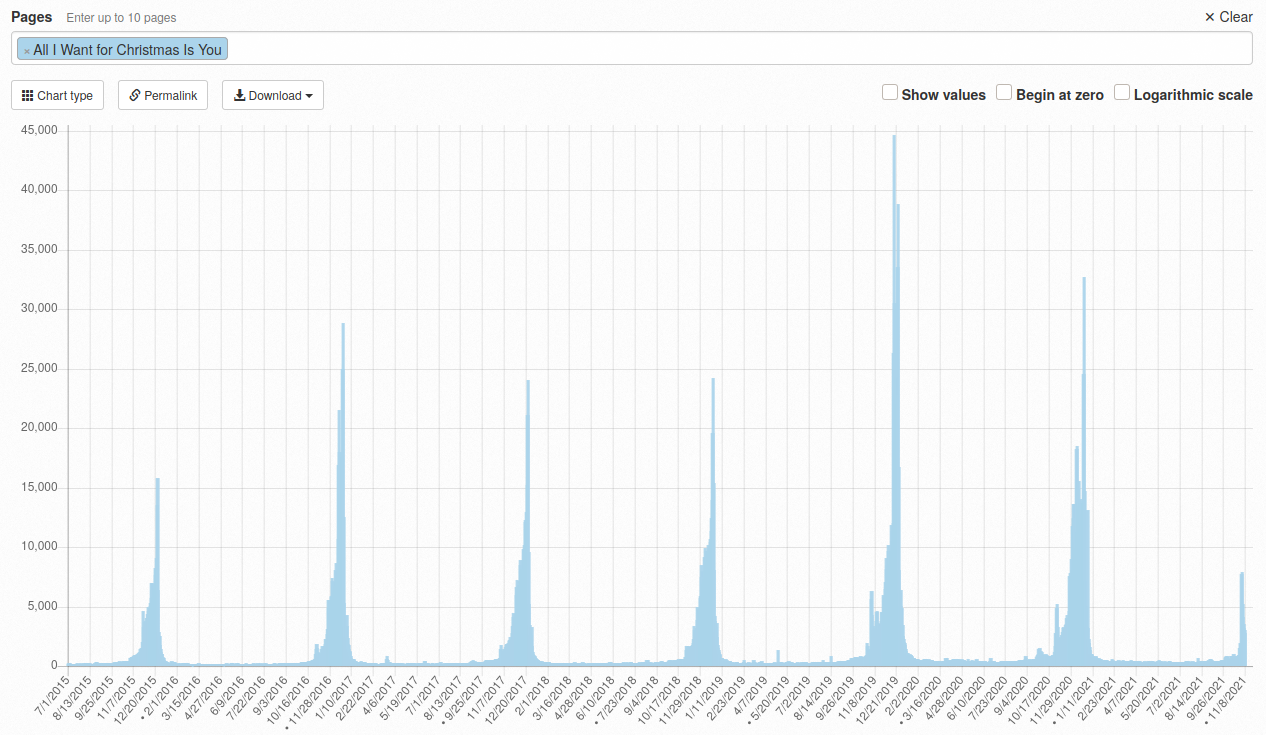 Given this data from 2015 up until yesterday what will the pageviews forecast look like for this year?

Running the most basic Forecast Forge forecast looks like this: 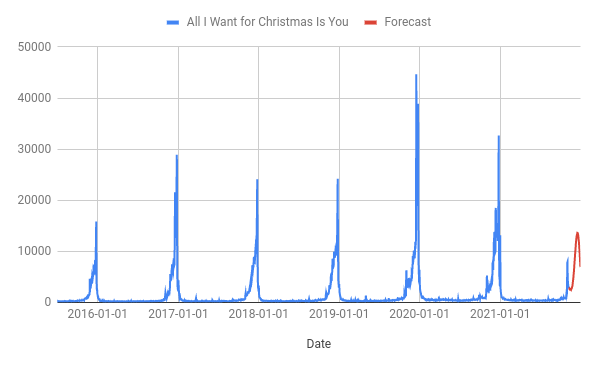 There are a few good things here; the algorithm has clearly learned that something big happens in December and it isn’t doing anything too crazy like predicting negative values. But, it seems to me, that the algorithm is massively underestimating the scale of the “All I Want for Christmas is You”-mania that is likely to happen in 2021.

The above statement is partially me making a judgement call (I think it is possible but unlikely that the wikipedia page will see the lowest levels of traffic since 2015) ad partially me knowing that the default Forecast Forge algorithm will struggle to fit seasonalities as extreme as we see in the training data.

This kind of thing is a tradeoff that all machine learning approaches will have to make somewhere; the flexibility required to fit extreme seasonality like this would also allow the algorithm to overfit in other situations where there is random noise. Unfortunately I can’t just make a few easy tweaks behind the scenes to Forecast Forge and have it magically work for this forecast and all the others. So I’m going to have to get creative to improve things.

The first thing to do is to look at the chart and try to figure out what kind of seasonal pattern there is. 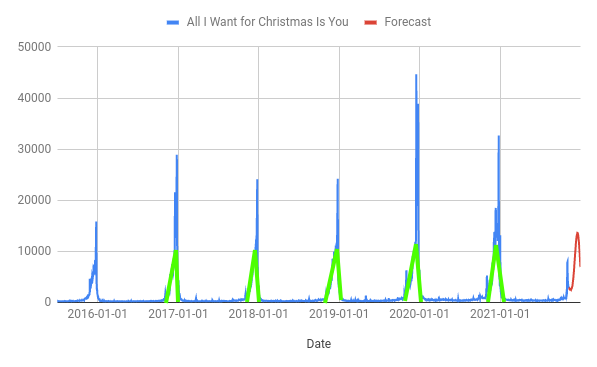 To me, it looks like there is two parts to it:

You can add regressor columns to help fit both of these patterns as long as the pattern is the same every year; to me, this looks fairly close to the truth for the sawtooth section, but less so for the extra spike. 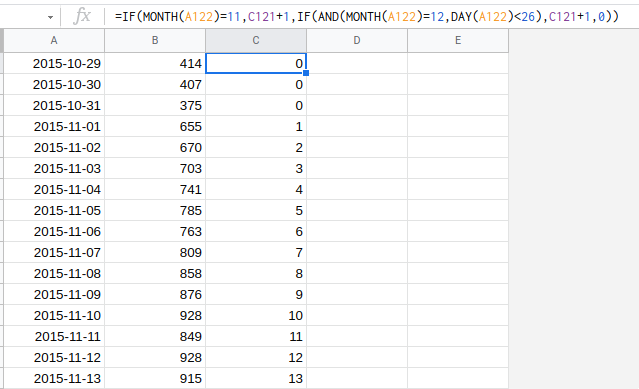 You can easily add a sawtooth regressor by having an ascending count of days since November 1st. The count resets back to zero after December 25th and then starts again on November 1st the next year. The machine learning then makes sure that the slope of the sawtooth in the forecast is the best fit for the training data. 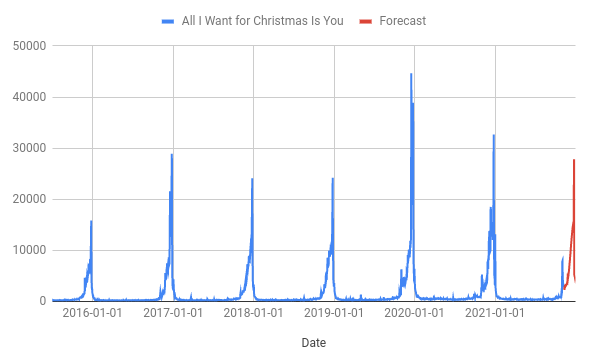 This looks much more like it! Now let’s add another regressor for the big spike. This is a bit more of a judgement call; I’ve added it just for December 24th and 25th but you could spread it out across more days. You could even do a “final week” sawtooth if that was a better fit for the data (the end result would be two sawtooths stacked on top of each other).

The forecast with this method is quite similar to with just the sawtooth but the extra regressor column allows for a slightly higher peak:

There is a bit more work that could be done here; Maria re-released her Merry Christmas album in 2019 which is probably why that year is so high and in 2020 she was in an Apple TV Christmas special. As far as I can figure out this will not be happening in 2021 although she has released a new collaboration with Khalid on November 5th.

Here is the output from the spreadsheet:

A quick, easier to check prediction; pageviews for the “All I Want For Christmas is You” wikipedia page will peak on 24th December close to 30k. I will check in again with how this is looking nearer the time and also show you some other forecasting methods.

Get updates in your inbox