A place to hammer out ideas

Data transforms are super important for getting the most out of your forecasting. With Forecast Forge you need to use them if your data must be within a specific range (e.g. sessions must always be greater than zero, conversion rate must be between 0% and 100%) and they can also improve the accuracy of your forecasts too!

This video shows you how to test different data transformations and pick the one that performs the best.

I recently read a very interesting post from Patrick Stox on the Ahrefs blog. Since it concerns itself with SEO forecasting I wanted to write something covering two main points:

Patrick uses a forecasting algorithm which is part of an open source project called Prophet. Prophet was created by Facebook and it is the main algorithm used by Forecast Forge (at the time of writing). It is possible to produce a very similar forecast to what Patrick/Ahrefs have done using Forecast Forge.

You can see an example template of this in Google Sheets

This last week has been all about usability.

I have tried to improve the error messages so that when the inputs are bad or something else goes wrong you have a better idea of what it is and how to fix it.

There is still a lot of work to be done here but these improved messages will hopefully help people use the tool; an important part of learning is making mistakes and experimenting but this doesn’t work if you can’t get good feedback - if you are just guessing and hoping for the best it will take a lot longer to learn.

Get Better Results from CausalImpact by Tweaking BSTS

CausalImpact is an R package that helps analyse the causal effect of an event on a metric of interest.

It is often used by media analysts trying to pinpoint the uplift caused by campaigns or by SEOs wanting to prove their impact to clients.

Mark Edmonson has made a tool called GA Effect where you can try it online with your Google Analytics data.

The output of the analysis can be visualised like this:

On Tuesday last week I casually tweeted about my new Forecast Forge project. 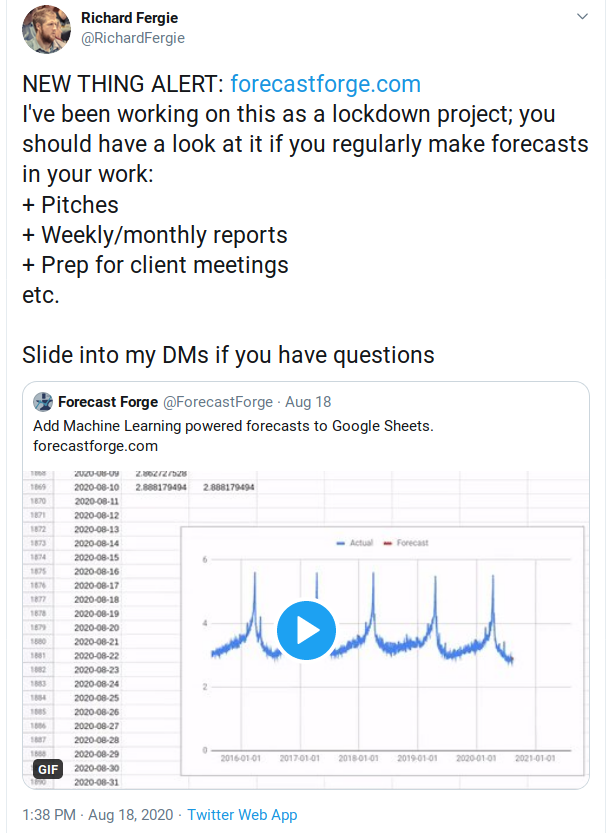 I was hoping to line up a few beta testers to kick the tires and break the addon in new and unexpected ways.

This is starting to sound like the kind of update where I revel stellar signup numbers off the back of going viral. Spoiler Alert that isn’t what happened.

I’ve been a fairly heavy Twitter user since late 2008 and the above launch tweet is by far the most popular one I’ve ever had on the platform.

Get updates in your inbox