PPC and Google Ads is where I first started in my career so it has a special place in my heart. I have a million ideas on how forecasting and Forecast Forge can help in this industry and they are all logjammed up in my head waiting for me to write “The Ultimate Guide to PPC Forecasting” or something like that.

You could say I’m having some supply chain issues with keeping the blog posts flowing so I thought I’d just get something out there with some of my thoughts even if it isn’t everything.

When thinking about which factors inflience paid channels one of the most important and most obvious ones is the amount of money you spend! Spend more money, get more clicks/conversions/revenue etc. How much more is an important question which I’ll get to later.

Without data on how much was spent any machine learning algorithm will struggle to tell the difference between changes in budget and other factors (e.g. seasonality, growth in the market etc.). Was June a big month because conversion rates are higher in June or is it just that the budget was a lot higher?

In Forecast Forge you need to specify the values for any regressor columns into the future in order to make a forecast. This is easier with paid media budgets than it is with something like the weather because people generally have a budget plan for the year ahead which can be a good starting point.

You can think of a very simple model of paid media performance as being something like this:

One of the good things about machine learning is that we can give is a vague model like this and it can fill in a lot of the details for us. The big idea here is that you can train the Forecast Forge algorithm on historical output and media spend data so that it will learn all the important patterns in the other stuff.

Unfortunately there is one further complication; Forecast Forge uses an additive model which looks something like this:

(ln is the logarithm function)

So to make our original paid media model fit with how Forecast Forge works it looks like this:

You need to train the model on the log of output with the log of media spend as a regressor column. This will give you a forecast for ln(output) which you can then exp to transform it back into a forecast for output.

With this transformed model we are asking Forecast Forge to learn the trends and seasonalities in ln(other stuff) rather than just other stuff. In practice, this normally works fine.

Although this is a really nice model simplification it misses a crucial and important part of what it is like to manage paid media; as you increase the amount you spend then the ROI on each marginal dollar gets lower and so your overall ROI gets worse too. If this wasn’t the case and you could spend the 1001st dollar with better ROI than the 1000th dollar then you should do whatever you were going to do with that dollar earlier!

Similar to the earlier, simple model we want to come up with a vague “shape” for what these dimimishing returns look like and then the machine learning can fill in the details more precisely.

One nice option for the shape of the diminishing returns curve is a power law:

When alpha is less than 1 this gives a curve where the return diminishes over time. Different values of alpha change how hard the output is hit by diminishing returns as media spend increases. 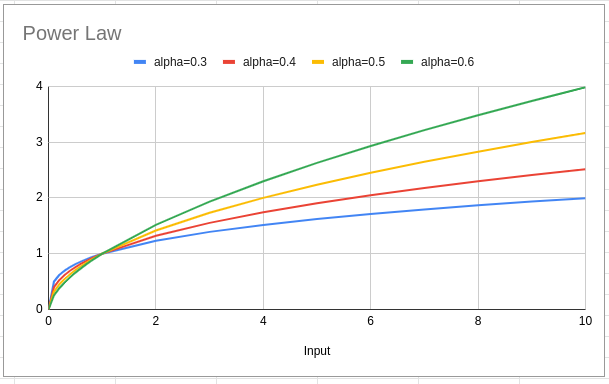 So the new model is

The regression part of the Forecast Forge algorithm is designed to figure out the value of alpha in this case so you don’t need to do anything extra (beyond the log transformation) to get power law diminishing returns in your forecast!

Situations where this won’t work

Unfortunately there are a couple of weaknesses to this method that means it shouldn’t be used in every situation:

I’ll address the final situation in the next section. If you are struggling with the first one then get in touch and I’ll see if I can help. For the second problem (lack of training data) there are no easy solutions.

If you are a small ecommerce business just dipping your toes into the Google Shopping waters then you won’t need to worry about hitting the limits of the available market for some time; in this situation the power law model above is likely to be “good enough” for some years.

But if you are a large advertiser or someone trying to figure out the right amount to spend on brand then you really do need to worry about what the upper limits are and how close you are to them; assuming unbounded growth is not realistic and ignores an important part of the problem for you.

To account for this, we need to change the model from a power law to something more complicated. The team over at Facebook Marketing Science use the following shape in Robyn:

Which means that we can group capacity in with other stuff and leave it for the machine learning to figure out rather than having to worry about it ourselves. Sometimes I love algebra!

This still leaves the alpha and gamma parameters. I’m sad to say that I don’t have a nice easy way to figure these out in Forecast Forge (yet!). I suggest running backtests with different values to see what gives you the best fit on historical data.

When your spend is equal to gamma you should be at 50% of the total capacity (e.g. 50% impression share) which might give you a good starting point for the trial and improvement process.

The chart above shows the same data as before comparing the power law and S-curve (saturating) forecasts. As you can see, the algorithm has learned there is lower capacity in Q4 so even with a massive increase in budget the number of goal completions is capped and much lower than what the power law forecast predicted.

This is much more realistic for this business; there is no amount of money they can spend in December that will get them more goal completions than they had in August.

More to come on these topics in future blog posts; subscribe by email to make sure you don’t miss out (I only send blog updates to this email list - no sales pitches beyond whatever appears on the blog anyways).