Forecast Forge uses what is known as a structural time series model for forecasting which means that your forecast is made up of the sum of several components. For Forecast Forge there are three types of component:

Sometimes you will see a forecast and be confused about why it is predicting what it predicts. Or you think the forecast is bad but you aren’t sure what it is you can do about it.

Being able to see what Forecast Forge has learned for each component can help you with both of these problems but this information was not available… until now! 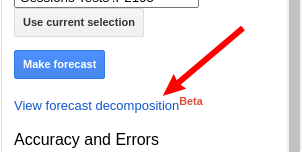 When you create a forecast in the sidebar you will see a link that you can click to see more information about the separate components that make up your forecast. Here is an example for the All I Want for Christmas is You forecast I made in November of last year.

The first chart in the report shows the values of the forecast as well as what the forecast would have predicted during the training period.

Things to look for here:

In the Mariah Carey forecast image I can see lots of outliers around Christmas 2020 and 2021. It also looks like for most of the year (i.e. outside of December and maybe November) the predictive interval is far too wide. These two observations could be linked because outliers can teach the algorithm that the data is more random than it actually is - this means it then increases the width of the predictive interval to allow for this.

The trend represents the longer term patterns in your data adjusted for any seasonal variation and for any regressors.

Forecast Forge uses a piecewise linear trend which means the trend is made up of a series of straight line segments. The most recent of these segments is extended into the future to make the forecast. The uncertainty interval allows for the possibility of the trend changing in the future; this is learned from how much the trend has changed in the past.

In the example above the trend has changed quite often and by quite a large amount so the predictive interval for the trend widens quite quickly.

For the Mariah Carey forecast (pictured above) there has also been some large changes in the trend, but the forecast period is so short that the predictive interval for the trend remains narrow. Also, if you look at the size of the figures on the y-axis you can see that the trend is not very important for this forecast; at most it contributes about 2800 daily sessions.

Things to look for in the trend chart:

Forecast Forge tries to smooth this pattern out to prevent accidentally mistaking a one off event as part of a repeating pattern. The downside is that this limits how “spiky” a pattern it can fit. If you have an annual pattern where some days are very different from the days either side of them you should use a regressor column for better results.

In the Mariah Carey example we can see three things:

All three of these problems are because of the annual seasonality smoothing.

The example above shows a different pattern with a slight peak through the summer months and a trough through December. The fitted model would show traffic rising after Christmas a little bit too early - in reality it should stay low until after New Year - but this is still much better than the Mariah forecast.

It is important to note that the Forecast Forge algorithm assumes that both of these seasonal patterns will stay the same in the future. If, for example, you are in a sector where people are ordering earlier and earlier in the year then Forecast Forge will not automatically recognise this pattern.

When you enter a country code then behind the scenes Forecast Forge looks up a database of holidays for that country and adds a regressor column for each holiday. This is a binary regressor with a 1 on the day of the holiday and a 0 on other days.

The holiday chart shows the effect of all these holidays.

In the example above (UK holidays) most of them have a negative effect on website traffic.

These charts make it very obvious that the effect of a holiday is applied only on the day of the holiday and not in the days or weeks preceding it. If you have a holiday that is very important for your business then you will likely see increased traffic/sales in the run up - but this will not be modelled by the default holiday effects. This pattern might be learned by the annual seasonality component but if it isn’t then you’ll have to add a manual regressor column (or columns).

And then charts for each regressor individually. If you only have one regressor column then you’ll see two charts the same.

Forecast Forge doesn’t get to see your column headers so the regressors are named Regressor 1, Regressor 2 and so on. Regressor 1 is the leftmost regressor column in your spreadsheet and then Regressor 2 is the one to the right of it etc.

To plot all the charts in this post the forecast needs to be split into it’s component parts. This can only be done after any data transforms have been applied.

For example log(trend + seasonality + regressors) does not equal log(trend) + log(seasonality) + log(regressors) and this relationship also does not hold for the other commonly used transforms (logistic and Box-Cox).

This means that the decomposition charts will all be on the scale of the transformed data, not your original scale.

In conclusion, I hope this new feature will help with three things: